The Church of St. Stanislaus Kostka has represented the spiritual heart of Rochester’s Polish American community since its dedication in 1909. This majestic structure is the second church of the parish formed in 1890 by Rochester’s first Polish Catholic immigrants.

Ground for the church was broken in 1907 and its foundation was completed before winter with the assistance of men of the parish, who helped excavate the site with hand shovels. When the new church was completed, it became a sign of the immigrants’ faith and the vitality of their community, as well as the most striking landmark of the city’s Polish Town.

Designed in the Romanesque Revival style by the architectural firm of Gordon and Madden, St. Stanislaus has an exterior of red pressed brick with Medina stone base and white stone trim. The exterior features many graceful details including arched openings, columns, decorative brick, and inventive gargoyles. A distinctive domed steeple that is reminiscent of church spires in Eastern Europe rises 120 feet above the front entrance.

The high altar is carved of wood and is the work of Frank Pedevilla, a native of Austria who designed altars and pulpits for many churches in the diocese. The five statues on our altar depict these saints:

Center: St. Stanislaus Kostka, 16th century Jesuit and patron of our parish.
Left of St. Stanislaus: St. Wojciech, tenth century Bishop of Prague who preached the Gospel in Polish territories.
Right of St. Stanislaus: St. Jadwiga of Silesia, a noblewoman who aided the poor and established the first Cistercian convent in Trzebnica.
Wings of the altar: St. Cyril (monk) and St. Methodius (bishop), brothers who brought the Gospel to Eastern Europe, Russia, and Ukraine. 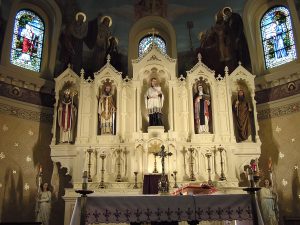 The beautiful mural that spreads across the sanctuary dome is the work of Buffalo artist Joseph Mazur. It depicts 18 saints, kings, and beatified holy ones who figure prominently in the history of Catholicism in Poland and Eastern Europe. Starting from the left side, they are:

The beautiful dome of the nave ceiling presents the “dome of heaven,” a traditional motif found in early Christian churches. The dome features a vivid blue sky highlighted with stars of gold and silver leaf.  It was restored in 2003 by Henry Swiatek during our Church Restoration Campaign.

Icons of the Four Evangelists (situated precisely north, south, east, and west on the ceiling) are joined by a cross radiating from the Lamb of God and incorporating the Tree of Life. The mural symbolizes the Church’s mission to spread the Gospel to the four corners of the world.

The Evangelists are shown with their traditional symbols:

Shrine of Our Lady and Pope John Paul II

For Poles and people of Polish descent, no image is more beloved than the icon of Our Lady of Czestochowa. This shrine honoring “the Black Madonna” was dedicated on November 16, 2008, to celebrate the centennial of St. Stanislaus Church.  Here, we draw closer to Our Lady, encouraged by the example of Pope John Paul II who throughout his life expressed deep love for her. 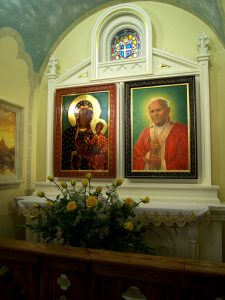 Shrine of Our Lady and St. Pope John Paul II

The church’s stained glass windows were created in Austria by the Tiroler Glasmalerei Anstalt. As you move along the south aisle (St. Stanislaus Street side), you will see windows of…

The windows in the clerestory (upper level) depict angels holding scrolls inscribed with the Eight Beatitudes in Polish.

In the north transept of the church, you will see these beautiful features…

In the south transept of the church, you will find these beautiful features:

The side altar murals were created in 1947 by Guido Nincheri (1885-1973), an acclaimed artist from Montreal known as “the Michelangelo of Canada.”

During his career, Nincheri created or oversaw production of more than 5,000 stained glass windows, frescoes, paintings, sculptures, and decorative pieces. His work was commissioned for an estimated 200 buildings, the majority in Canada and New England.

In our church, Nincheri created murals of the Annunciation (side altar, north) and the Sacred Heart appearing to St. Margaret Mary (side altar, south).

These murals covered two earlier murals on the same subjects created by Joseph Mazur in 1924.

There are four stained glass windows in the choir loft:

On the base of the choir loft is a fresco mural created by Joseph Mazur, with an inscription in Polish – a line from the Litany of Our Lady placing the parish and its people under Mary’s protection.

This mural was covered over with white paint in the 1970s, lost from view for 30 years. It was uncovered with gentle scraping – almost completely intact — and retouched by Henry Swiatek in 2001. 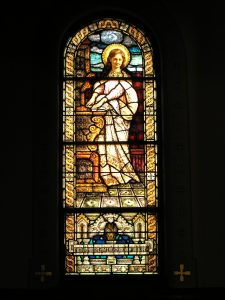 This quiet corner of our church offers a place to recall the poignant stories of two St. Stanislaus parishioners.

The window of St. Cecilia, patron of musicians, is a memorial to Emily Dukat, a promising violinist who died of influenza in 1920 at age 16. Her parents, owners of a bakery on Hudson Avenue, donated the window in her honor. The lovely facial features and wistful smile of St. Cecilia in this window belong to Emily, whose photograph was sent to Innsbruck where the saint’s face was created in her likeness. 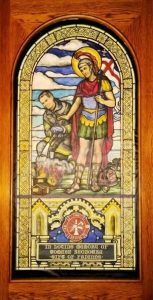 The window of St. Florian, patron of firefighters, is a memorial to Tomasz Kaczowka, who passed away along with his mentor and friend, Lt. Michael Chiapperini, while responding to a fire in Webster on December 24, 2012. Touched by the sacrifice of this young man who was only 19 years old, the parish commissioned the window, made possible through the generosity of parishioners, family, and friends. It was created by Pike Stained Glass Studios.

In the window we see St. Florian, who was a Roman soldier, looking down on a raging fire and with a gentle hand quelling the flames. Although in many renderings St. Florian is shown assisted by an angel, in this window it is a young man in firefighter’s gear – with Tomasz’s features – who pours water on the flames.